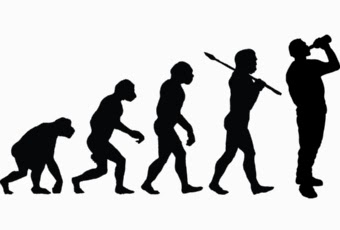 When someone argues that evolutionary science has nothing to do with the science of origins, instead of being a jerk about their beliefs, try these few simple steps instead:

1)  Grab a beer (because scientific discussions are always more enjoyable with a nice micro-brew in hand).
2)  Ask whether evolutionary science has anything to do with philosophy (i.e. the science of knowledge, reality, etc.).
3)  Discuss.

A1) Offer them a beer
A2) Discuss their philosophy of origins (i.e. what they believe about how or why the world, as they know it, originated).
A3)  Pay attention to your beer and theirs. Replenish often.

Hopefully somewhere between the micro-brews and the philosophical discussion about "origins" two minds will meet at two identical conclusions: (1) that beer really did make the discussion more enjoyable, and (2) evolutionary science has something to do with the science of origins: it has a philosophical connection, because both subjects cannot be discussed in relation to each other without some philosophical pre-commitments

(If they said "no" to the question above)

B1)  Offer them a beer anyway (because, hey, who doesn't like beer?)
B2)  Discuss their philosophy about evolutionary science supposedly having nothing to do with origins (i.e. why they think that is necessarily the case).

If it turns out that some participants in this discussion suddenly feel intimidated, or don't want to "debate" their philosophy versus ours anymore, at least everyone had an opportunity to enjoy beer!

The bottom line is this: A nice micro-brew makes every philosophical discussion better. So while you're sipping down your micro-brew, pray that each party within the discussion realizes that evolution has something to do with origins. Pray that they realize it makes no real, knowledgeable (i.e. philosophical) sense to discuss why the science of evolution has nothing (or something) to do with the science of origins unless both sciences are mutually dependent upon some philosophical commitments.

Posted by Epexegesis at 1:35 PM No comments:
Email ThisBlogThis!Share to TwitterShare to FacebookShare to Pinterest
Labels: Epexegesis, Ethics, Science