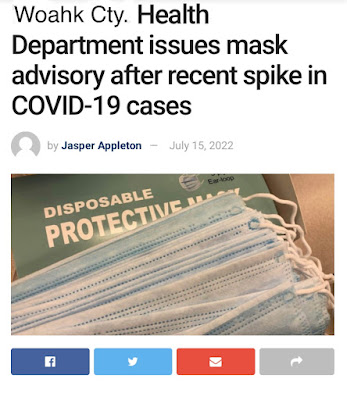 BS.5 is spreading quickly in Woahk County. It’s a variant, so it deviates slightly from BS.4 Omega, and Daleth, which also exhibited slight differences from its deadly mutant strain, Diadem91, killing billions every year during the tyrannical and transphobic Trump administration.

Even with prior infection, BS.15 is seemingly more transmissible. (Seemingly, as in a biosecurity-state agenda that seems to have no end in sight.) BS.5 is also seemingly more immune-invading. This new BS invades immune systems like no other immune system has ever been invaded. The good news is that the vaccine is working! Severe illness and death are both battled against around the clock by each and every hard-working vaccine.

This is why the time is more critical now than ever, and Woahk County is issuing a face-diaper mandate. Face-diapers are an important additional tool to protect against widespread infection. Face-diapering is a critical public health tool.

Posted by Epexegesis at 1:50 PM
Email ThisBlogThis!Share to TwitterShare to FacebookShare to Pinterest
Labels: Epexegesis