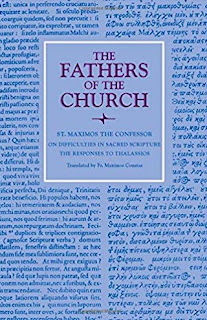 The following excerpt is from a very recent translation of St Maximos the Confessor’s (ca. 580-662) Responses to Thalassios, the Libyan abbot of a monastic community, probably in Carthage, whose letter to Maximos contained a lengthy series of questions, requesting written interpretations (p. 8).

What is presented below is (at least in my own estimation) one of the most profound responses to the eschatological question, “If God in the coming ages will show his riches (Ephesians 2:7), how is it that the ends of the ages have come upon us (I Corinthians 10:11)?”

Here is the written response by St Maximos:

He who brought all visible and invisible creation into being solely through the momentum of His will, had in His good counsel determined—before all ages and even before the very genesis of created beings—an ineffably good plan for his creations. And this plan was for Him to be mingled, without change, with human nature through a true union according to hypostasis, uniting human nature, without alteration, to Himself, so that He would become man—in a manner known to Him—and at the same time make man God through union with Himself, and thus He wisely divided the ages, determining that some would be for the activity of His becoming man, and others for the activity of making man God.

Thus, inasmuch as the actual “ends of the ages” predetermined for Him to become man “have come upon us”—since the divine purpose of the Incarnation has been fulfilled through the events themselves—the divine Apostle, having carefully examined this, and seeing that the end of the ages intended for God to become man had come about through the very Incarnation of the Word of God, says: “The ends of the ages have come upon us”—not simply “the ages” as we ordinarily understand them, but clearly those which, intended for the actualization of the mystery of embodiment, have reached their proper limit, according to the purpose of God.

Since, then, the “end of the ages”, predetermined according to God’s purpose to become man, “has come upon us”—inasmuch as God has in truth actualized and brought to completion His own perfect Incarnation—we must henceforth await those other ages that are to come for the actualization of the mystical and ineffable divinization of human beings, in which "God will show the overflowing riches of His goodness to us,” completely and actively effecting divinization in those who are worthy. For if He Himself reached the limit of his mystical activity of becoming man,—becoming like us in every way but without sin, and having descended into the lowermost parts of the earth to where the tyranny of sin had driven man—then there will certainly also be a limit of God’s mystical activity for the divinization of man in every way (with the obvious sole exception of any identification of man with God’s essence), making man like Himself and raising him beyond all the heavens, to where the natural grandeur of grace dwells and calls fallen man through the infinity of goodness. And this is what the great Apostle mystically teaches when he says: “in the ages to come, the overflowing riches of God’s goodness will be shown to us.”1

1. St Maximos the Confessor, On Difficulties in Sacred Scripture: The Responses to Thalassios
(The Fathers of the Church, Volume 136), Translated by Fr Maximos Constas; Washington, DC: The Catholic University of America Press, 2018; pp. 150-151

Posted by Epexegesis at 8:48 PM
Email ThisBlogThis!Share to TwitterShare to FacebookShare to Pinterest
Labels: Epexegesis, Ephesians, Eschatology, I Corinthians