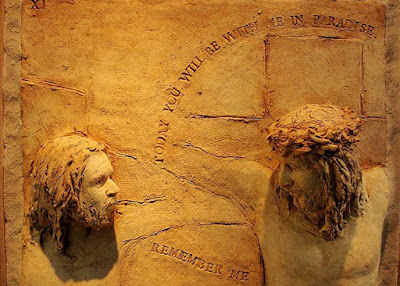 It has been a long time coming, but I am now, finally, prepared to post my thoughts about Jesus’ Sermon on the Mount. I've actually had plenty of notes prepared for years, as one could guess from how much of Matthew's Gospel I have blogged about in the past. I'm just now making time to jot them all down on my blog. Here goes something.

Sections “A” and “A’” are self explanatory, so I’m going to begin my comments with sections “B” and “B’.”

The first part of section “B” worth noting is its emphasis upon “Blessing.” Blessed are the poor in spirit, for theirs is the kingdom of heaven. Blessed are those who mourn, for they shall be comforted, etc.

The word in Greek translated here as “Blessed” literally means “Happy.” Among the forty five beatitudes of the Old Testament, this word is used to denote blessedness in terms of being in a privileged and fortunate situation—a situation which ought to make you very happy. Furthermore, it’s interesting to notice carefully that all of those old testament beatitudes somehow, some way, cover one of four themes:

These two themes, I surmise, are also in the background of each “beatitude” in Jesus’ Sermon. Let's now see how this plays out.

With such a background, this first beatitude leads me to suspect that it was given to prepare Israel for the persecutions which would arise from those who are “rich in spirit” (ie. the unjust, arrogant, bloodthirsty, oppressors) before the Kingdom came in their generation. Interestingly, even a cursory glance at Luke’s version of this Sermon shows the clear parallels between those who are “poor” and those who are “rich.” Matthew adds “in spirit,” but I think it’s safe to say that Luke’s shortened version still had the same people in mind (Luke 6:20, 24). The poor in spirit would be those who would suffer persecutions for their loyalty to Jesus, whereas those who were rich in spirit would be the persecutors, who have already received their consolation, which is why they felt justified in their allegedly righteous persecutions of others.

Who are those who mourn, and why does Jesus teach the crowds to not only anticipate “mourning,” but also to welcome it?

According to St. Augustine, those who mourn are those who grieve “over the loss of things that are highly prized. Those who have been converted to God are losing the things which in this world they used to embrace as precious things, for they find no delight in the things which they used to enjoy. They are torn with grief until a love for eternal things is begotten in them. …When they have lost temporal happiness, they may fully enjoy the eternal.”1

When I ponder the things in life which were “highly prized” among 1st century Jews, and what attachments they delighted in and embraced as precious, the first things which come to mind are Israel’s inheritance in the land, and especially every way of life which centered on Herod’s temple. This leads me to suspect that this beatitude was given to prepare Israel for the judgment which would fall on Jerusalem and their their people in that generation. Jesus expected them to weep over their most highly prized attachments, and to find comfort in eternal things.

Who are “the meek”? And what does “meekness” have to do with inheriting the “earth” (or “land”, which is what the Greek word can also mean)?

According to the Scripture, the meek are the ones who shepherd Israel and receive abusive treatment from their sheep without retaliating unjustly, trusting that God will see and act justly in response (Num 12:3; II Sam 16:5-12). They are the ones who “refrain from anger, forsake wrath, and delight in abundant peace,” waiting patiently for YHWH to judge evildoers and vindicate the just in the land (Psa 37:1-10). They are the ones who believe YHWH laughs at the wicked. They quietly trust that a day of just judgment awaits their enemies who prosper in the land (Psa 37:11-13).

This leads me to think that this beatitude reminded Israel to not retaliate toward their enemies throughout the coming trials within that generation and, like King David and his disciples, to patiently trust in God’s vindication for the injustices they would suffer for His name’s sake.

St Augustine, again, wisely said that “The meek are those who submit to iniquities and do not resist evil, but overcome evil with good. Let the haughty, therefore, quarrel and contend for earthly and temporal things. But, ‘Blessed are the meek, for they shall inherit the land’—the land from which they cannot be expelled.”2

Jesus’ Sermon seems to describe a healthy fasting for all three:

Those who “hungered and thirsted” for justice were those, like the Apostle Paul, who desired that God would judge justly among the anti-Christian Jews and Judaizers infiltrating the Christian churches and dividing the faithful within them. When reviled, Paul told his Christian congregation not to take justice into their own hands, but rather to bless those who reviled them; when persecuted, they were told to endure persecution; when slandered, they were told to entreat God for justice (1 Cor 4:11-13).

All of this leads me to believe that this beatitude prepared Christian Israelites to endure various trials and temptations from men. The Christians would seek justice among their Jewish brethren, but would not find it. Fortunate are those who, starving for justice, await satisfaction from God’s justice.

In light of this, I found some comments from the Fathers insightful. In the context of Jesus' Sermon, St. Jerome said that “It is not good enough that we desire justice, unless we also suffer hunger for it.”3

Likewise, St. Hilary of Potiers said that “The blessedness which [Jesus] appropriates to those who hunger and thirst after justice shows that the deep longing of the saints for the doctrine of God shall receive perfect replenishment in heaven; then “they shall be filled.”4

I think they were correct.