The Church as Lone Prophet (A Meditation for Ordinary Time) 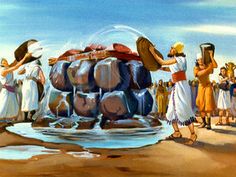 In 1st Kings chapter 18, we learn that the wicked king of Israel, Abab, has hunted down all the prophets of YHWH in an attempt to remove their influence throughout the land. And just before our reading today, he summoned all of Israel and all of their prophets to defeat the Lord's last prophet, along with his "God" on Mount Carmel. At this point in the story, it's all the prophets of Baal versus one prophet, Elijah, the lone prophet of YHWH. Elijah, again, is outnumbered. The odds seem to be completely against him. But as we soon learn, just one lone prophet with the Lord on his side, is greater than the world that opposes him. 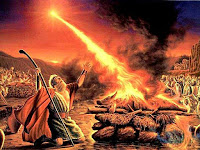 You all know the story. In the end, the prophets of Baal cannot summon their gods to rain down fire from heaven. The Baal worshipers make fools out of themselves all day long, and at the end of the day Elijah prays to the Lord one time, and the Lord answers him. The Lord answers by raining fire down from heaven, and Elijah's God—the living and true God—wins. And when all the people saw the Lord answer Elijah's prayer, they fell on their faces confessing that YHWH is God (1 Kings 18:38-39).

Because of Elijah's loyal and loving faithfulness to the Lord, by the end of chapter 18, it looks as though the dawn of Israel's redemption seems very near. We finally see a glimmer of hope in the story, where the Lord seems to be turning the idolatrous house of Ahab, and the corrupt hearts of Israel, back to Himself. But as soon as we turn the page and enter chapter 19—which is our reading for today—we hit a major road block. Apparently Elijah's loyalty to YHWH didn't stop all of the leaders of Israel. Jezebel, the queen, was particularly upset with his victory. And instead of turning to the Lord, the leaders of Israel follow Jezebel's reaction against Elijah's faithfulness by threatening and conspiring to kill this last, lone prophet of YHWH. For those familiar with the history of the powerful nations surrounding Israel, reactions of these sorts are expected from enemies. (Similar reactions occurred with later prophets as well, like John the Baptist and even Jesus himself.) In Elijah's day, Israel had become another powerful empire of its own, just as corrupt as the surround ungodly empires.

Even Paul, when writing to the Galatians, was prepared for the hostile reactions of Judaizers who were breathing threats against him and against his gospel. The Judaizers painted Paul's gospel as a threat to the Faith, yet Paul faithfully and lovingly urged the Galatian Christians to follow his example, obeying the gospel of the Lord Jesus Christ and not another gospel.

Like Elijah and Paul, the Church is called to be a prophetic witness sent out ("apostled") to the nations. As such, the calling of the Church is to love and serve the Lord through all threats against Him and against His anointed ones. In doing so, the Lord's victory over the idols of every generation becomes obvious to all. But that isn't to say that such faithful witnessing is always easy or even comfortable. It can be incredibly intimidating and demanding at times as well.

Like Elijah fleeing into the wilderness and lying down in despair under a tree to die (1 Kings 19:5), at times we—the Church—will exhaust ourselves through various trials, and will even want to lie down and accept defeat at times, too. But the witness of Holy Scripture reminds us that the Lord is faithful to those who remain jealous for Him. He is faithful to those who trust and obey Him through the high mountain-top victories and low valleys of wilderness wandering—quite literally through life and death. As we see vividly in the Elijah narrative, just when the feelings of defeat and death set in, the Lord resurrects hope within, visiting them with food and drink to endure their long journey (1Kings 19:5-8).

The gospel of our Scripture readings today could not be more clear: In the midst of despair, when most people follow the "Baals" of the land or simply reject the lordship of Jesus outright (as many of Israel did in Paul's day), the Lord does not forget His people. Instead, the Lord nourishes and raises up a remnant in the midst of a dry and thirsty land, to remind us that even when despair or depression or exhaustion has distorted our vision of God's love for this world, God has the situation under control. He has not stopped loving this world of His, even through its trials and judgments; nor has He forgotten His people through such judgments. Just as the lone prophets and apostles were God's means for preserving the Faith of Israel through judgment, so the ministry of the Church in Christ Jesus—the prophet and apostle of our confession (Heb 1:1-4; 3:1)—is God's means of saving the world.

As we learned in our gospel reading today, it is in Christ that each earthly house—whether it's the house of the Gerasenes, or Israel, or Baal—can flee from judgment, and can have its Legion of demons cast out. As the Church of Jesus Christ, we are sent out into the world to bear witness to that One who delivers his enemies from bondage to sin and calls them to proclaim how much God has done for them (Luke 8:39). Our calling might be difficult. It might be exhausting too. But when we get weary and weak because of our faithfulness, at least we know where rest and refreshment are found for our journey. It is here, in Christ's Church, that the weary are given rest, and the weak receive food and drink for every journey ahead.

It is in Christ Jesus that we, the Church, are all sons of God. For Paul says, as many of you as were baptized into Christ have put on Christ. In Christ we are now a new creation, so we ought to live like the new creation we are, living with gratitude, living with praise and adoration of Jesus Christ, living unashamedly as a prophetic witness of His lordship over all. It is in this Church united to Jesus Christ—this new Jerusalem which has already come down from heaven—that death is swallowed up in victory, and all things are being made new.

Believe that, and don't be ashamed to proclaim how much God has done and will continue doing for the world. And if you're ever feeling ready to throw in the towel, don't lean upon your own understanding. Rather, in all your ways acknowledge Jesus and He will direct your paths. He won't forsake you or anyone else who puts their trust in Him. So put your trust in Him. Lean on him. He wants you to, especially when you feel like a lone prophet in this world. He walks alongside you, directing the way you should go, so that you can put your trust in Him. Even if it's through death's darkest valley, don't fear any evil, for the Lord is with you. Let his rod and staff comfort you, for he walks with you, ready and willing to show the world that He is your Shepherd, and in Him you lack nothing. In the name of the Father, Son, and Holy Spirit. Amen.

O Lord, make us have perpetual love and reverence for your holy Name, for you never fail to help and govern those whom you have set upon the sure foundation of your loving-kindness; through Jesus Christ our Lord, who lives and reigns with you and the Holy Spirit, one God, for ever and ever. Amen.