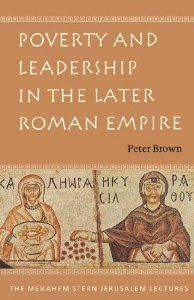 In his book, Poverty and Leadership in the Later Roman Empire, Peter Brown, Rollins Professor of History at Princeton University, comments on Christian charity and their treatment of the "poor" in the early (pre-Constantinian) Church. Most fascinating is his description of the way Christians viewed themselves as a vital society within the world yet not of the world:

The sharp pen of Lucian… is one of the first glimpses that we have from an outsider into the inner workings of a Christian community. ...

A century before the conversion of Constantine, the Christian communities were characterized by a sharply "bifurcated" notion of the duties of the rich and the poor. Not one group, but two groups, claimed the support of the "cheerful givers" in every congregation.
First, of course, there were impoverished fellow believers--orphans, widows, the sick, the imprisoned, refugees, and the destitute. As far as we can see, Christian almsgiving at this time was a fiercely inward-looking activity. It did not include unbelievers. Rather, it strengthened the boundaries of the community, like solid rings of bark around a tree, by not allowing any fellow Christian to be forced by poverty to restore to help from nonbelievers.
Nor was it a random matter. The bishop and the clergy were supported by a share of the offerings of the faithful. But they received these offerings, in part, in the name of the poor: they were to redistribute what remained from their own upkeep to the widows, orphans, and destitute. The bishop was presented, above all, as the oikonomos, as the "steward," of the wealth of the church. This wealth was to be used by the clergy for the benefit of the poor. In some circles, even private almsgiving was discouraged: ideally, all gifts to the poor were to pass through the bishop and his clergy, for only they knew who needed support.
This last was an extreme opinion. But the centralization of wealth in the hands of an energetic bishop could be decisive. The letters of Cyprian, bishop of Carthage from 248 to 258, are impressive testimony to his use of wealth for the care of the poor in order to reinforce his notion of the Catholic church as a closed, embattled community grouped around its bishop. Only those "poor" who were known to have stood firm in times of persecution and to have remained loyal to the bishop in the crisis that followed were to receive support. Local heroes who had endured imprisonment in times of persecution received allowances. Cyprian provided refugees out of his own private funds, thereby saving well-to-do Christians the shame of accepting alms as if they were members of the indigent poor. The boundaries of the Christian community were protected. Christian traders were given bridging loans. A convert who had made his living by teaching acting (a profession tainted by idolatry) was maintained by the poor fund of his local church. Cyprian advised the bishop to send him to Carthage, where the church, being wealthier, was better able to support him until he learned a new trade. A considerable sum--one hundred thousand sesterces, the equivalent of half the yearly salary of an Imperial secretary or of a month's wages for three thousand workmen--was hurriedly collected in Carthage to ransom Christians captured in a raid by Berber tribesmen. Unfortunately, the list of donors that was appended to this letter has not survived. Would that it had. With it we might have had evidence of a Carthaginian Christian community of unexpected wealth and social complexity. Altogether, in the words of Graeme Clarke, the translator of the Letters and the author of by far the best commentary upon them, Cyprian's letters provide "practical evidence of the Church constituting a society within a society, a regular tertium genus."
Thus, a solid middle core of "cheerful givers" was called upon to support two sharply different groups of dependent persons, each of which was liable to considerable expansion--both the clergy and the poor, with the clergy claiming to act as distributors of the wealth of the church in the interests of the poor. Writing in 251, to the bishop of Antioch, Cornelius, bishop of Rome, emphasized the extent of this double responsibility. …In 303, we learn that a police raid on the premises of the church of Cirta, a provincial capital, found a storeroom with sixteen shirts for men, thirty-eight veils, eighty-two dresses and forty-seven slippers for women, along with eleven containers of oil and wine. Furthermore, we know that the church of Cirta had, besides its bishop, at least three priests, two deacons, two subdeacons, one grave-digger, and five readers. None of these were paupers. One reader was a schoolmaster and the other a tailor, a sartor--or, perhaps, even a skilled craftsmen in mosaic work, a sarsor: that is, he was exactly the same sort of skilled artisan as Lucian's uncle, the sculptor, had been and from whose trade Lucian had escaped to higher things. But all the clergy--that is, the priests and deacons--and possibly lesser personnel as well, would have received from their bishop regular sportulae. These were gifts derived from a weekly division of the offerings of the faithful. The offering itself was a major ceremony, performed each Sunday. It involved a procession toward the altar and the solemn dividing up of the contributions of the faithful at a table loaded with offerings in cash and in garden produce.
Thus, when Constantine deeded to patronize the Christian church in 312 he found a body committed to a double charge: a duty to give to the poor and a duty to support the clergy. He also found among the Christian laity many well-to-do persons who had long been alerted to the need to scrutinize the clergy whom they themselves supported, to ensure that their money was spent to good effect. An ideology that linked the wealth of the church to the "care for the poor" and that made the clergy responsible for that care was firmly established in Christian circles before the conversion of Constantine. It would have been what a lay person (such as Lucian) would have known about the new sect.1