At the end of the last post I promised an explanation for a very different translation of Hebrews 9:16-18. But what I did not present in the previous post was a modern english translation with which to compare it. And so, in order to help facilitate a clear difference between the two translations, I will post my translation side by side with the ESV translation.


16  For where a will is involved, the death of the one who made it must be established.  17 For a will takes effect only at death, since it is not in force as long as the one who made it is alive.  18 Therefore not even the first covenant was inaugurated without blood.  (ESV) 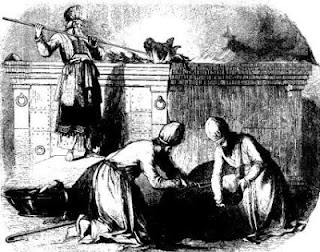 Also, based on the assumptions of the ESV translators, verses 16 and 17 are interpreted as though Jesus is the "one who made" this alleged "will", and therefore, in order for the "will" to go into effect, Jesus has to "establish" it by dying. But my translation does not speak about "establishing" (phero) the death of Jesus at all. Instead, my translation offers the more common and literal interpretation of the verb phero as meaning "to bear", "carry", or "bring forward" a thing. This is why my amplified translation in previous posts inserts the words "be carried." As David Allen has noted, the meaning of phero in Hebrews 9:16 "can be interpreted in three different senses: (1) in the sense of "offering" within a sacrificial context; (2) "to be represented," or (3) in the sense of "bringing something forward."1 After this, Allen notes carefully that the Greek word phero is never found extra biblically in relation to "will" or "testament."

Also, the clause in verse 16 which mentions "the one who made it" (ESV) is translated less literally than my version. The Greek is tou diathemenou, which uses the possessive definite article alongside a person who is literally "covenanting" or "ratifying a covenant". The same exact words in Greek are used in verse 17 (but with a different conjugation) where we find the ESV mentioning (again) "the one who made it" (ho diathemenos).  David Allen comments on the significance of this repetition:


That the articular participle ho diathemenos can be translated as "covenant-sacrifice" or "covenant-ratifier" rather than the "one who makes a will/covenant" would open the door for the meaning of a covenant being inaugurated by means of a sacrificial death.2

What we see then is that it's certainly plausible, if not probable, that the author was expressing a very common fact about priestly service and worship in the old covenant tabernacle, namely that the "death" of the "covenant-ratifier" must be "carried" or "brought forward" into the presence of God. Under the old covenant law, the worshiper brought animal sacrifices forward. And after the worshiper died representatively through means of animal sacrifices, those dead victims were then carried on behalf of the worshiper by a mediating priest into the very presence of God.

The next point of difference between translations is in verse 17, where we find the ESV talking about a "will" that only "takes effect" at "death". My own personal opinion is that this is a horrendously inaccurate translation of the original Greek text. First of all, there is no word for "only" in the Greek text. Therefore, to talk about something taking effect "only" under certain circumstances is to exaggerate the author's point. Secondarily, I don't believe the author is talking about a will again. He's talking about a "covenant." Thirdly, the text does not mention a time of "death" at all. The Greek is epi nekrois, which literally says "upon dead [bodies]". The word for "dead" here in Greek is plural in number. Again, Allen's comments are helpful:


The Greek phrase epi nekrois, "when somebody has died," is difficult to interpret. Literally the entire clause reads: "for a covenant/testament is confirmed upon dead [bodies]." The phrase epi nekrois should not be translated "at death" as is often the case since there is no evidence for this..."3

In conclusion, it is plausible, if not probable, that the author is describing a theological fact taught by the Law itself, namely that "a covenant is confirmed upon dead bodies." This is why he can follow that statement with further clarification about the worshiper failing to ratify the covenant in a valid manner if he does not confirm his own death upon dead animal victims slain and "carried" on his behalf. The worshiper cannot draw near to God without a sacrifice for his own sins, and if he does not offer what the laws of the priesthood prescribe, then he must present himself spotless before God (which is an impossibility). His covenant is not valid if he does not do what the Law prescribes and illustrates.

"Therefore not even the first covenant was inaugurated without blood." What follows verse 18 is an example from Exodus 24:1-2, where Moses sprinkles the blood of a slaughtered animal on behalf of Israel at the very beginning of their inauguration into covenant with God as a priestly nation. Is it merely a coincidence that the author continues the connection between Israel as a nation of priests and God inaugurating his covenant with them?

1.  David L. Allen, New American Commentary: Hebrews [B&H Publishing Group: Nashville, TN; 2010], pp. 481
2.  Ibid., pp. 479. A few paragraphs after making this statement, Allen attempts to offer a neutral opinion concerning the the conflict that ensues among scholars, saying "It is questionable whether the author intended this much symbolism behind his words." He then says that those who insist upon identifying the human worshiper with "animal sacrifices which usually accompanied the inauguration of a covenant, may be straining the author's language...".
3.  Ibid., pp. 481