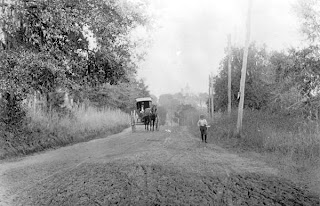 It was another late night with only a little sleep. It was also another night of random book selections from my library. Last night's pick: The Pilgrim's Regress, by C. S. Lewis.  Below is an excerpt which I just had to share because it describes in vivid details the honest curiosity and skepticism of a young Christian man in the face of rationalism and the autonomous wisdom of the world.


The story below is about a young man named John from the land of Puritania who meets a man named Mr. Enlightenment for the first time; and as they both travel down a road together in a horse buggy, John encounters the intriguing perspectives of an "enlightened" life for the first time:

"And where might you come from, my fine lad?" said Mr. Enlightenment.
"From Puritania, sir," said John.
"A good place to leave, eh?"
"I am so glad you think that," cried John. "I was afraid ---"
"I hope I am a man of the world," said Mr. Enlightenment. "Any young fellow who is anxious to better himself may depend on finding sympathy and support in me.  Puritania! Why, I suppose you have been brought up to be afraid of the Landlord."1
"Well, I must admit I sometimes do feel rather nervous."
"You may make your mind easy, my boy. There is no such person."
"There is no Landlord?"
"There is absolutely no such thing -- I might even say no such entity -- in existence. There never has been and never will be."
"And is this absolutely certain?" cried John; for a great hope was rising in his heart.
"Absolutely certain. Look at me, young man. I ask you -- do I look as if I was easily taken in?"
"Oh, no," said John hastily. "I was just wondering, though.  I mean -- how did they all come to think there was such a person?"
"The Landlord is an invention of those Stewards.2 All made up to keep the rest of us under their thumb: and of course the Stewards are hand in glove with the police. They are the shrewd lot, those Stewards. They know which side their bread is buttered on, all right. Clever fellows. Damn me, I can't help admiring them."
"But do you mean that the Stewards don't believe it themselves?"
"I dare say they do. It is just the sort of cock and bull story they would believe. They are simple old souls most of them -- just like children. They have no knowledge of modern science and they would believe anything they were told."

John was silent for a few minutes. Then he began again:

"But how do you know there is no Landlord?"
"Christopher Columbus, Galileo, the earth is round, invention of printing, gunpowder! !" exclaimed Mr. Enlightenment in such a loud voice that the pony shied.
"I beg your pardon," said John.
"Eh?' said Mr. Enlightenment.
"I didn't quite understand," said John.
"Why, it's as plain as a pikestaff," said the other. "Your people in Puritania believe in the Landlord because they have not had the benefits of a scientific training.  For example, I dare say it would be news to you to hear that the earth was round -- round as an orange, my lad!"
"Well, I don't know that it would," said John, feeling a little disappointed.  "My father always said it was round."
"No, no, my dear boy," said Mr. Enlightenment, "you must have misunderstood him. It is well known that everyone in Puritania thinks the earth is flat. It is not likely that I should be mistaken on such a point. Indeed, it is out of the question. Then again, there is the paleontological evidence."
"What's that?"
"Why, they tell you in Puritania that the Landlord made all these roads. But that is quite impossible for old people can remember the time when the roads were not nearly so good as they are now. And what is more, scientists have found all over the country the traces of old roads running in quite different directions. The inference is obvious."

"I said," repeated Mr. Enlightenment, "that the inference was obvious."
"Oh, yes, yes, of course," said John hastily, turning a little red.
"Then, again, there is anthropology."
"I'm afraid I don't know --"
"Bless me, of course you don't. They don't mean you to know. An anthropologist is a man who goes round your backyard villages in these parts, collecting the odd stories that the country people tell about the Landlord. Why, there is one village where they think he has a trunk like an elephant. Now anyone can see that that couldn't be true."
"It is very unlikely."
"And what is better still, we know how the villagers came to think so. It all began by an elephant escaping from the local zoo; and then some old villager -- he was probably drunk -- saw it wandering about on the mountain one night, and so the story grew up that the Landlord had a trunk."
"Did they catch the elephant again?"
"Did who?"
"The anthropologists."
"Oh, my dear boy, you are misunderstanding. This happened long before there were anthropologists."
"Then how do they know?"
"Well, as to that . . . I see that you have a very crude notion of how science actually works. To put it simply -- for, of course, you could not understand the technical explanation -- to put it simply, they know that the escaped elephant must have been the source of the trunk story because they know that an escaped snake must have been the source of the snake story in the next village -- and so on. This is called the inductive method. Hypothesis, my dear young friend, establishes itself by a cumulative process: or, to use popular language, if you make the same guess often enough it ceases to be a guess and becomes a Scientific Fact.

After he had thought for a while, John said:
"I think I see.  Most of the stories about the Landlord are probably untrue; therefore the rest are probably untrue."
"Well, that is as near as a beginner can get to it, perhaps. But when you have had a scientific training you will find that you can be quite certain about all sorts of things which now seem to you only probable."3


1.  The "Landlord" is the owner of the entire country in which all the characters of the story live.
2.  "Stewards" are people delegated by the Landlord to make rules and uphold moral standards for the entire country.
3.  C. S. Lewis, The Pilgrim's Regress [Wm. B. Eerdmans Publishing Co: Grand Rapids, MI; 1992] pp. 20-22

Posted by Epexegesis at 7:39 AM
Email ThisBlogThis!Share to TwitterShare to FacebookShare to Pinterest
Labels: Miscellanea