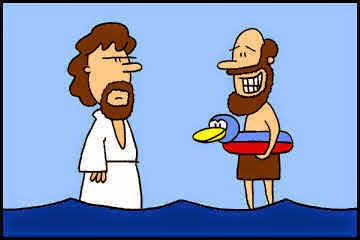 Matthew chapter fourteen is memorable for its two miracles: Jesus feeding five thousand people, and Jesus walking on water. But Matthew includes something else which no other gospel does: Peter walking on water.

This isn't the only time Peter is singled out and highlighted among the apostles. Later on within the same narrative section Peter is singled out and highlighted for a number of things: his great confession (16:16), Jesus giving him "the keys to the Kingdom of Heaven" (16:19), his awkward rebuke of Jesus (16:22), his request to set up three tents during Jesus' transfiguration (17:4), his confrontation with Jewish tax collectors and Jesus' private instructions to him about not offending them (7:24). All of these particular instances are pointing to something about his influential role as a leader among the apostles and first century Jewish Christians.

As noted in a previous post, Matthew is utilizing the history of John the Baptist and Jesus as types of prophets like those found among the post-Solomonic kingdom. Like the Queen's murderous plot against Elijah for prophesying against her "house," King Herod's wife, Herodias, plots to destroy John for prophesying against her "house" (14:1-12). But after John is murdered according to the Queen's request, Herod thinks Jesus is the resurrected John, and in that sense he is mistaken as an Elijah figure as well. Like Elijah before him, Jesus flees to the wilderness when his life is in danger (Matt. 14:13; 1 King 19:4; the Greek word sometimes translated as "desolate place" in the ESV is also the same word for "wilderness"), and then to a mountain to pray (Matt. 14: 23). This detail is peculiar because the last time a "mountain" was mentioned in Matthew's gospel was back in the Sermon on the Mount, which closely resembles Moses' giving of the Law at Sinai, only it was Jesus giving Torah to Israel in person. And when Elijah flees to the mountain for solitude and prayer, he flees to the same "mount of God" that Moses gave Torah to Israel (1 Kings 19:8). So earlier in Matthew's gospel, Jesus went up a "mountain" as a Moses-figure on the Mount of God, but now Jesus is going up a "mountain" as an Elijah-figure, ascending the same mount of God to plead on behalf of Israel.

In Matthew's narrative, John the Baptist is also regarded as a type of Elijah (Matt 11:7-14; 17:10-13; Mal. 3:1; 4:5-6). This changes things a bit because it aids in portraying Jesus a type of Elisha, Elijah's prophetic successor, as well. Just as Elisha multiplied loaves of bread for his disciples (and interestingly, Elisha is the only prophet in the old testament to perform this miracle: 2 Kings 4:42-44), Jesus feeds five thousand by multiplying loaves of bread. Like Elisha, Jesus also miraculously crosses the waters connected with the Jordan and is met by a school of disciples who "worship" him (Matt. 14:32; 2 Kings 2:14-15 LXX). And when his disciples are in the water, being tormented by the waves surrounding them (14:24),1 Jesus tells them "do not be afraid," which is the same thing Elisha tells his disciples when they are tormented by surrounding armies (2 Kings 6:15-17).

This is where the special focus upon Peter comes into play. Jesus just fed five thousand people and dismissed them (14:22). Afterward we find Jesus crossing the waters alone, and it is at that time we find Peter insisting to cross the waters with him, just like Elisha insisted to cross the waters with Elijah (2 Kings 2). We are not told why Peter wanted to cross the waters with Jesus. We're just told that he wanted to go if Jesus was willing to call him. Here Peter is portrayed as a leader among Israel, a type of Elisha who is willing to take up the mantle of his predecessor, Jesus. As St. Hilary of Poitiers aptly noted about this pericope, "Peter alone, turning away from the others, forsakes the world just as he did the waves of the sea, and sets out to follow the Lord's steps."2

This helps explain much of why Matthew includes this detail, whereas other gospels do not. Matthew does not tell us why Peter doubts after he starts crossing the waters, but he does make sure to let us know that Jesus thought about Peter's doubt: Jesus calls him a "little-faith"! (Some translations say "O you of little faith," but the Greek has Jesus addressing him directly as "little-faith"). Peter's persistence was great, but his faith was as "little" as the fearful disciples found earlier in Matthew's gospel (8:26). Perhaps Peter even thought of himself as an Elisha figure at his tenth step out into the water. Regardless, Matthew's main objective seems to be that Jesus is the greater Elijah of the narrative, and Peter is a chief disciples of his who needs to learn that lesson well. This makes Peter appear more like a Gehazi figure than an Elisha figure, disappointing his Master at a moment when faith is needed most. However, unlike Elijah's curse upon Gehazi's for his little faith, Jesus' reaction is different. Jesus blesses even the little faith that Peter has by stretching out a helping hand at the moment of his fall. And at the moment when Jesus gets into the boat, the tormenting waves stop too, which infers that the storm accompanied Jesus' walk across the waters. Jesus comes to his disciples accompanied with a storm, but the storm is only present because he is present. Likewise the storm is only dispelled because he gets out of the water and in to the boat with his disciples. Jesus comes, not only to help when his disciples fall, but also to reverse the cursed waves that torment his disciples by coming alongside them, getting into the boat with them.

All of this points to Jesus as the greater Elisha whose power over the waters is greater than the mere parting of the Jordan (2 Kings 2:14). Jesus is the Lord of creation himself whose Spirit hovered over the waters at creation and in Peter's day, and still continues to hover over the face of all deeps in our day. He is the great "I AM"3 who appeared at creation to separate light from darkness, and he's the One who continues to appear as light in the midst of the darkness of night to calm the torments of our life. Jesus is the one who commanded dry land to appear out of the chaotic waters in the beginning and He is the One who brings all of his disciples safely back onto dry land when the chaotic world rages against us.

All of this came about to Peter for the same reason that the Lord manifests himself in the lives of his disciples today: so that we can go out as his successors with greater faith than his disciples, declaring with even greater fervor than they did, that truly Jesus is the Son of God (Matt 14:33). If Jesus can make a great leader and disciple out of a "little-faith" like Peter, we can be sure that he can make great leaders and disciples out of us who believe a "little" too. But first, we must be willing to go out into the storms of life when Jesus calls. We must be willing to step out of the boat, if that's what Jesus calls us to do.

1.  The words translated in the ESV as "beaten by the waves" literally mean "tormented by the waves" in Greek
2.  St. Hilary of Poitiers, Trans. D. H. Williams, The Fathers of the Church: Commentary on Matthew [Washington, DC: The Catholic University of America Press; 2012], p. 168
3.  Matt. 14:27; the words of Jesus translated in the ESV as "It is I" literally mean "I AM" in Greek


Posted by Epexegesis at 8:17 PM
Email ThisBlogThis!Share to TwitterShare to FacebookShare to Pinterest
Labels: I Kings, II Kings, Matthew, Typology